Yuma International Airport proudly displays a variety of artwork throughout the airport terminal and its grounds. We hope you enjoy! 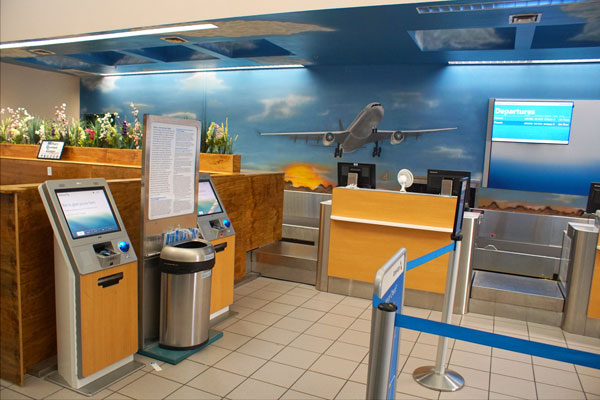 -Located on the West End of the Terminal- 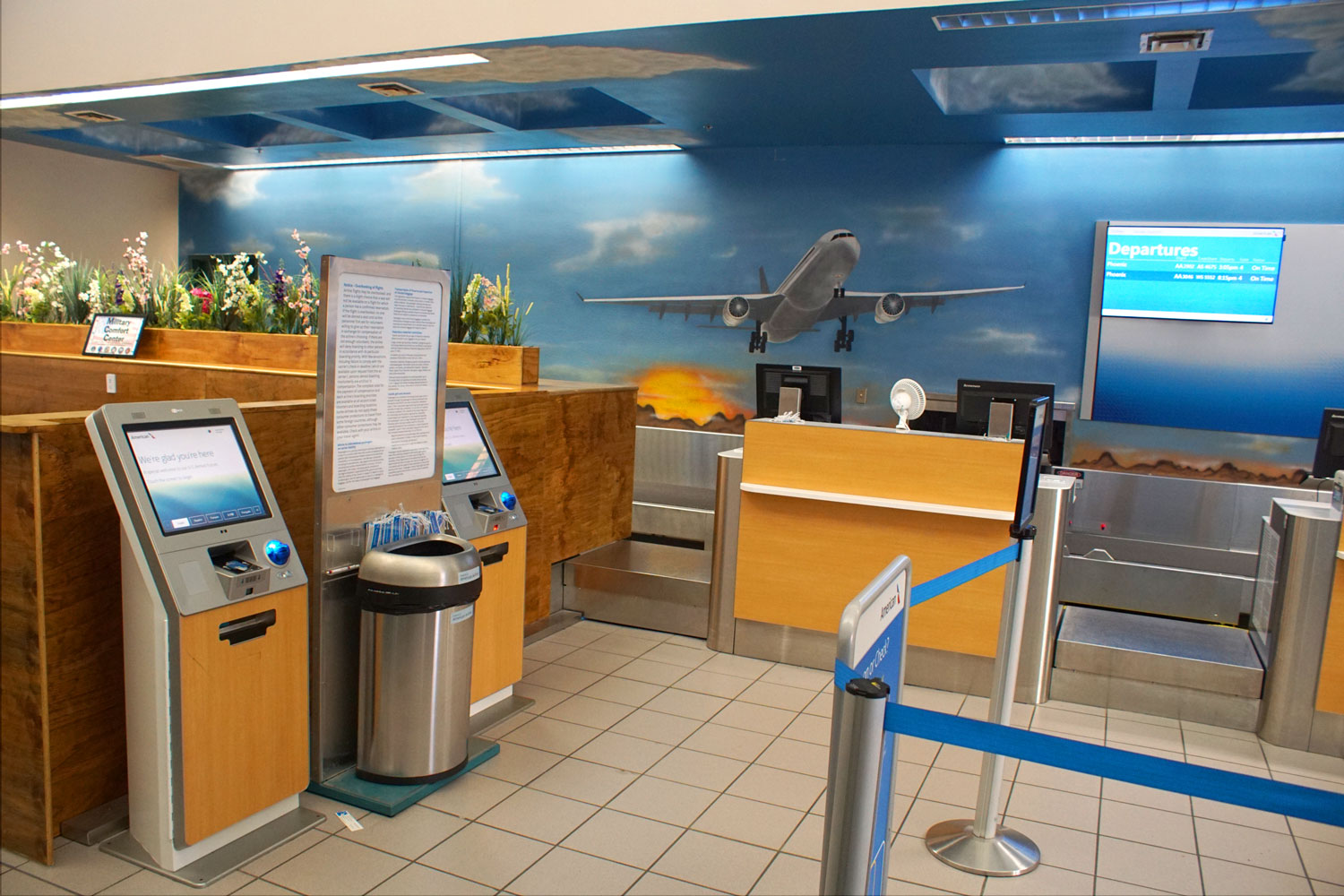 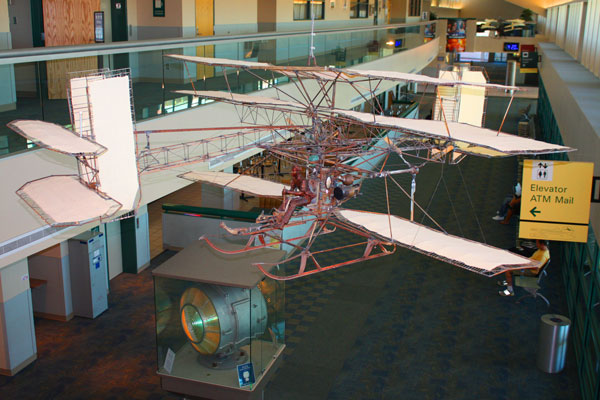 -Suspended above center of terminal-


A set of replica early model aircraft were incorporated into the construction of the airport terminal in 1999 and are suspended from the ceiling above the center of the terminal. Guests are welcome to the second level West or East mezzanines to get a closer look. 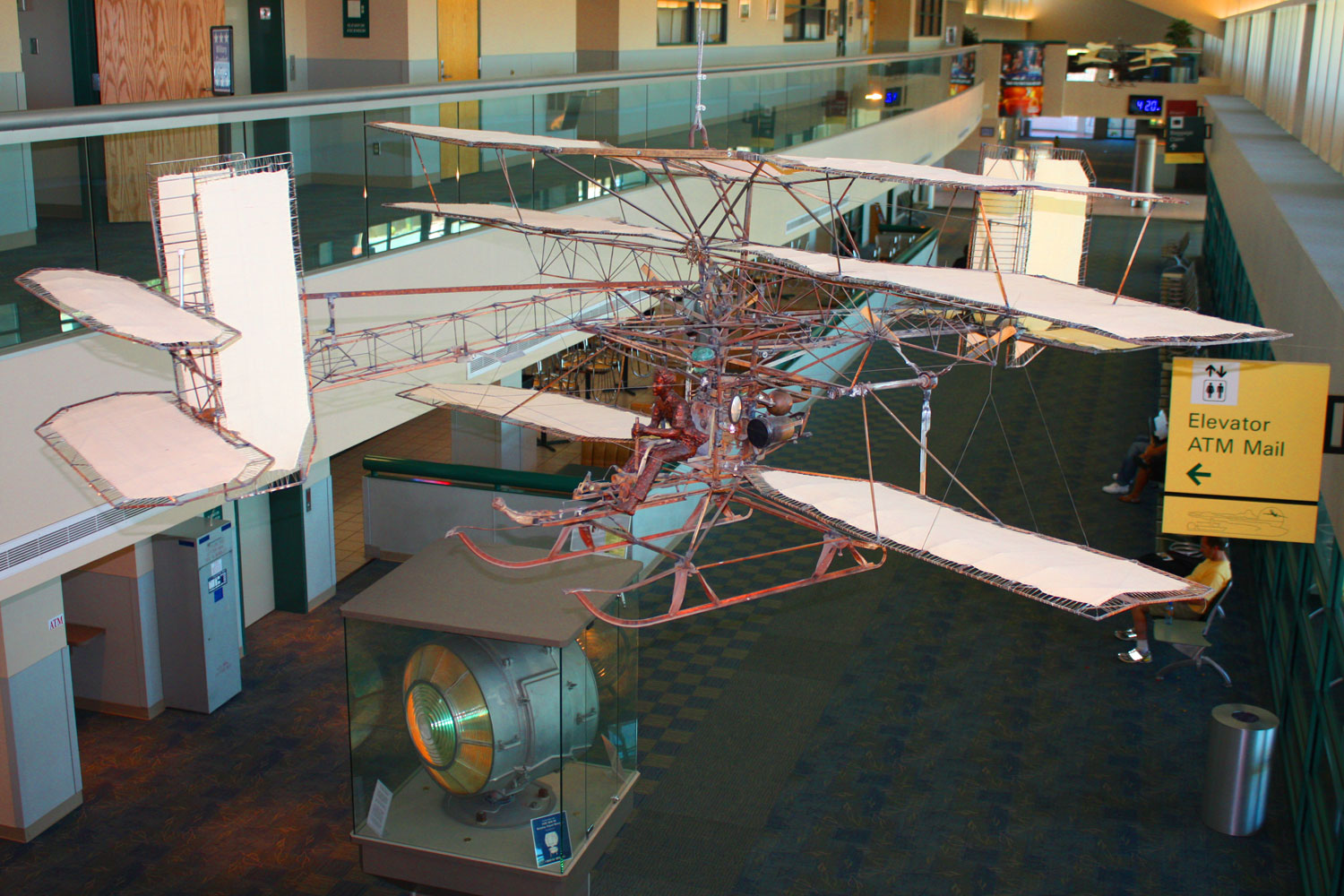 
Robert Fowler was the first pilot to land an aircraft in Yuma in October 25, 1911 on the site that is now the Yuma Landing Restaurant. A local artist produced and donated this water color for display at Yuma International Airport. 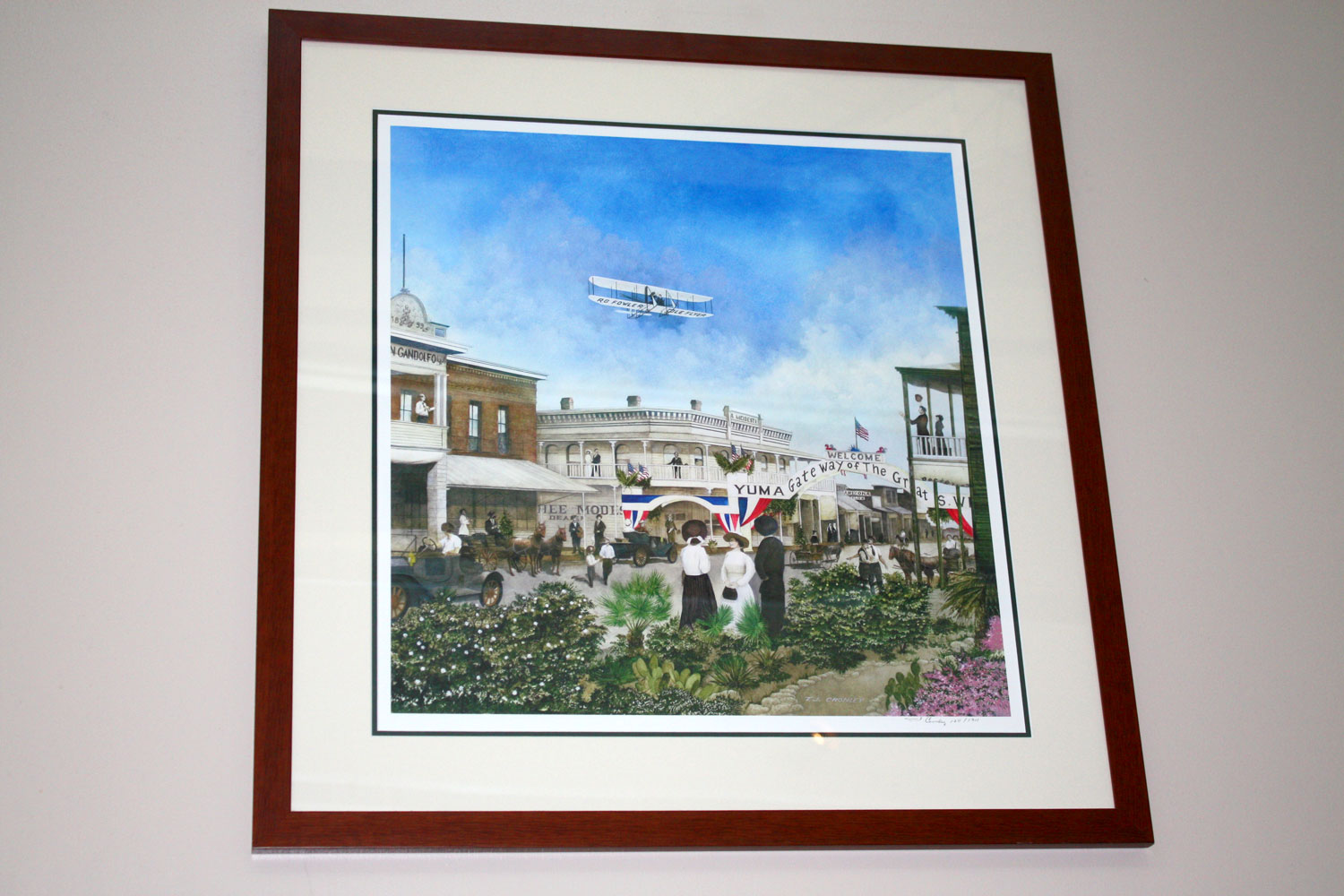 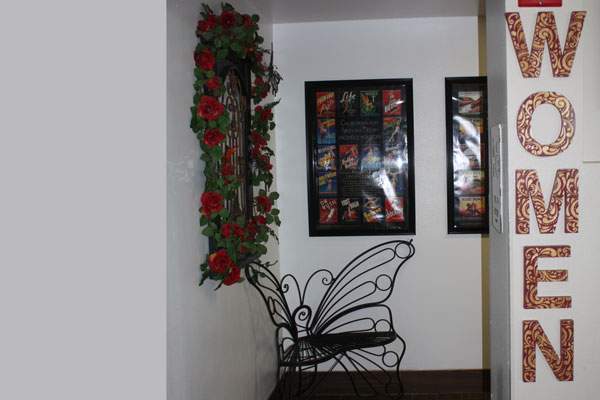 -Located throughout the terminal-


Each set of restrooms within the airport terminal are adorned with beautiful and historical graphics embracing Yuma's rich history along with personal messages to make our guests feel at home. 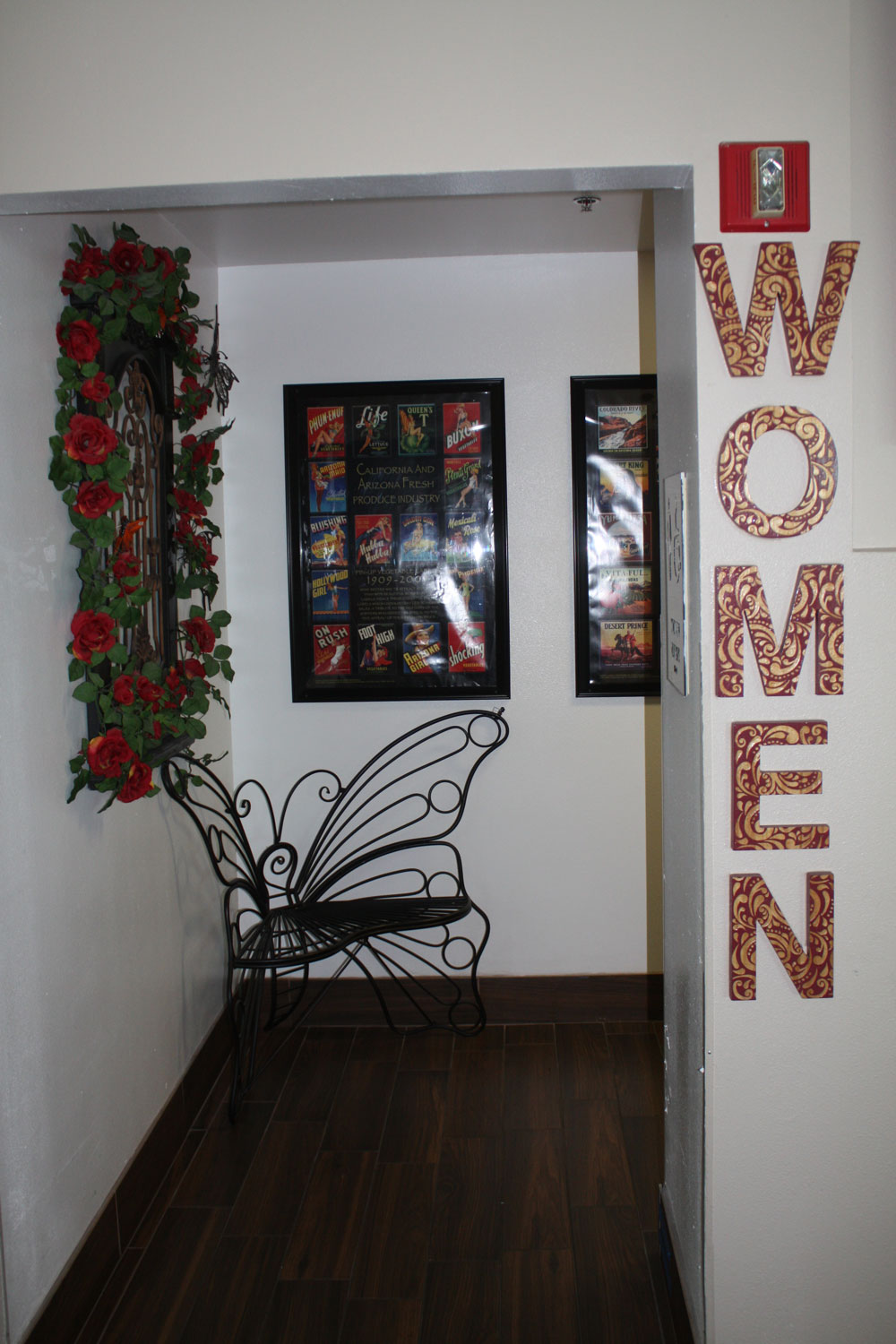 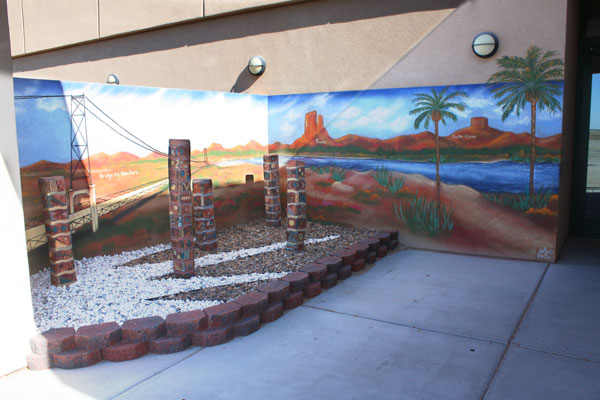 -Located at the Arrivals Entrance-


Yuma International Airport partnered with and commissioned Lia Littlewood of Littlewood Co-Op to create a mural celebrating iconic and historic landmarks found within the Yuma area for arriving passengers to enjoy.

The decorative Totems were masterfully crafted by artist Margaret LaBounty. For more information about the artist we invite you to visit labounty.com 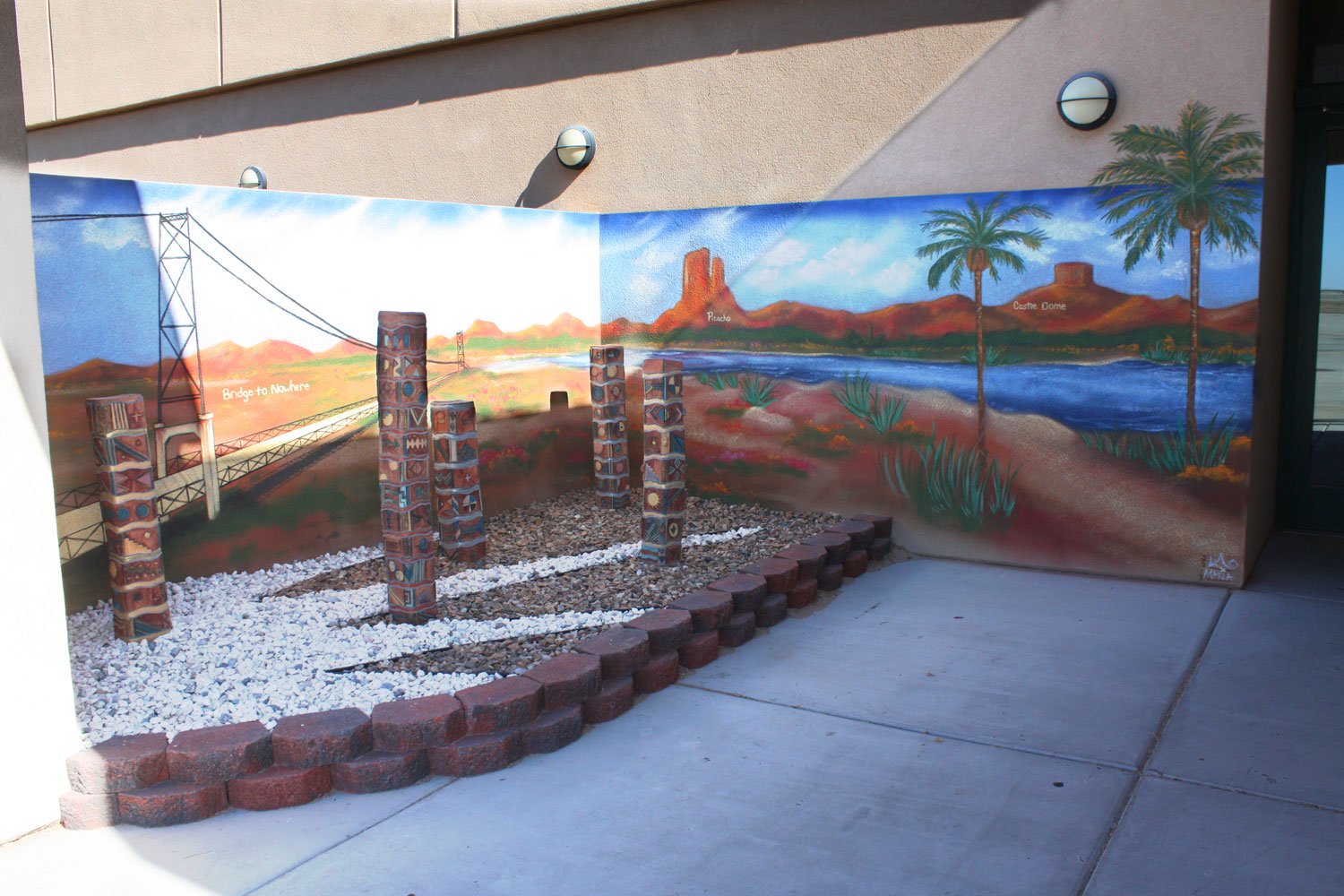 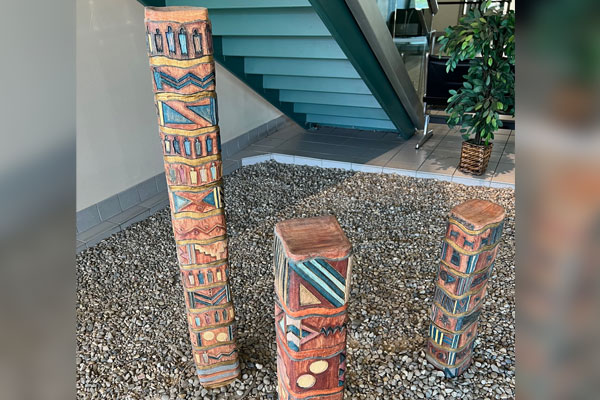 -Located at the Arrivals Entrance and Terminal Staircases-


Several sets of decorative Totems were donated as part of construction of Yuma International Airport's new terminal in 1999. They are beautifully displayed within the terminal near the East and West end stairwells as well as at the arrivals entrance.

The decorative Totems were masterfully crafted by artist Margaret LaBounty. For more information about the artist we invite you to visit labounty.com 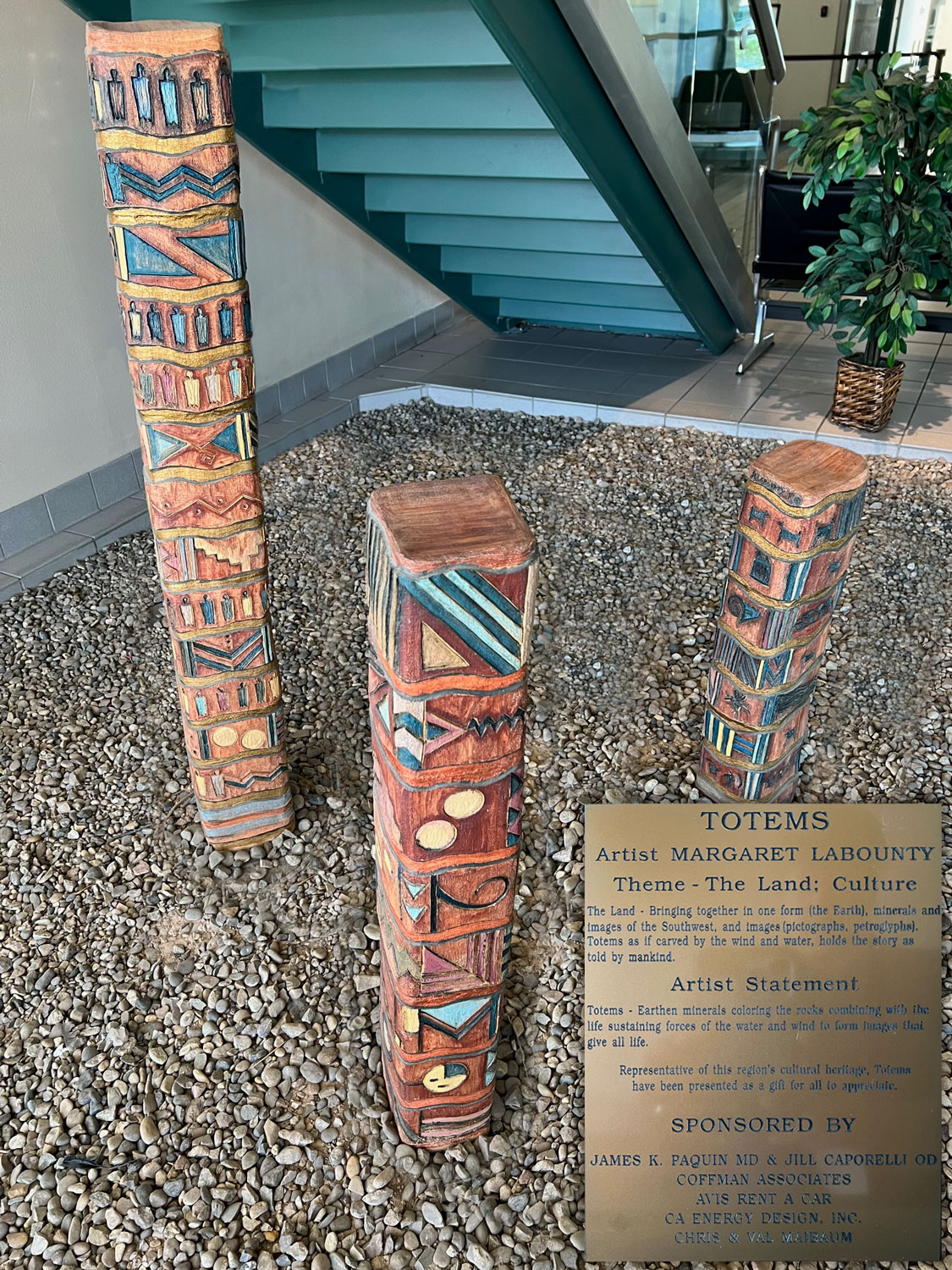 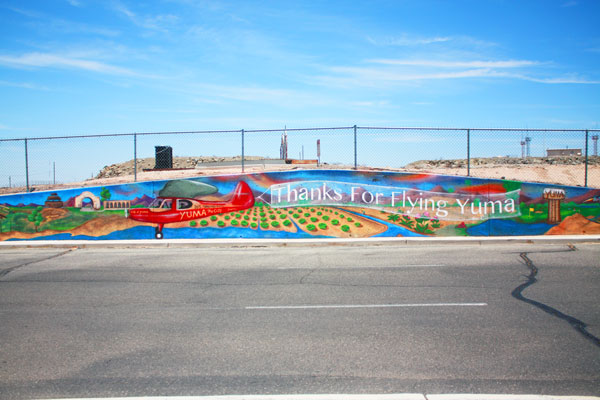 Thanks for Flying Yuma Mural

-Located at the exit of the airport property-


In an effort to express Yuma International Airport's sincere appreciation of our guests, we partnered with and commissioned Lia Littlewood of Littlewood Co-Op to create this mural complete with the historic Endurance Flight aircraft as well as iconic and historic Yuma landmarks. 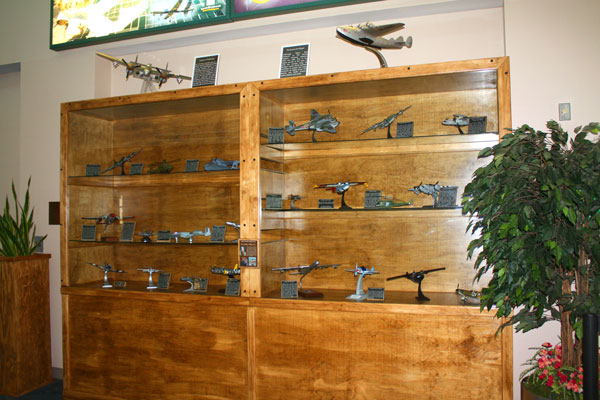 
Winslow R. Whitman Jr. was born on June 2, 1936 in Yuma AZ. After Serving in the Korean War, he retired in 1960. He came back to Yuma and married Joyce Dees. Together they have 1 son, Winslow R. Whitman, III and 1 daughter, Judith Lynne Whitman. Winslow was a farmer in the Yuma valley and enjoyed many things, including making model airplanes. Before he passed away on October 17, 2017, he asked that his model airplanes be donated to the Yuma International Airport so everyone could enjoy them. The beautiful display was constructed in 2019. 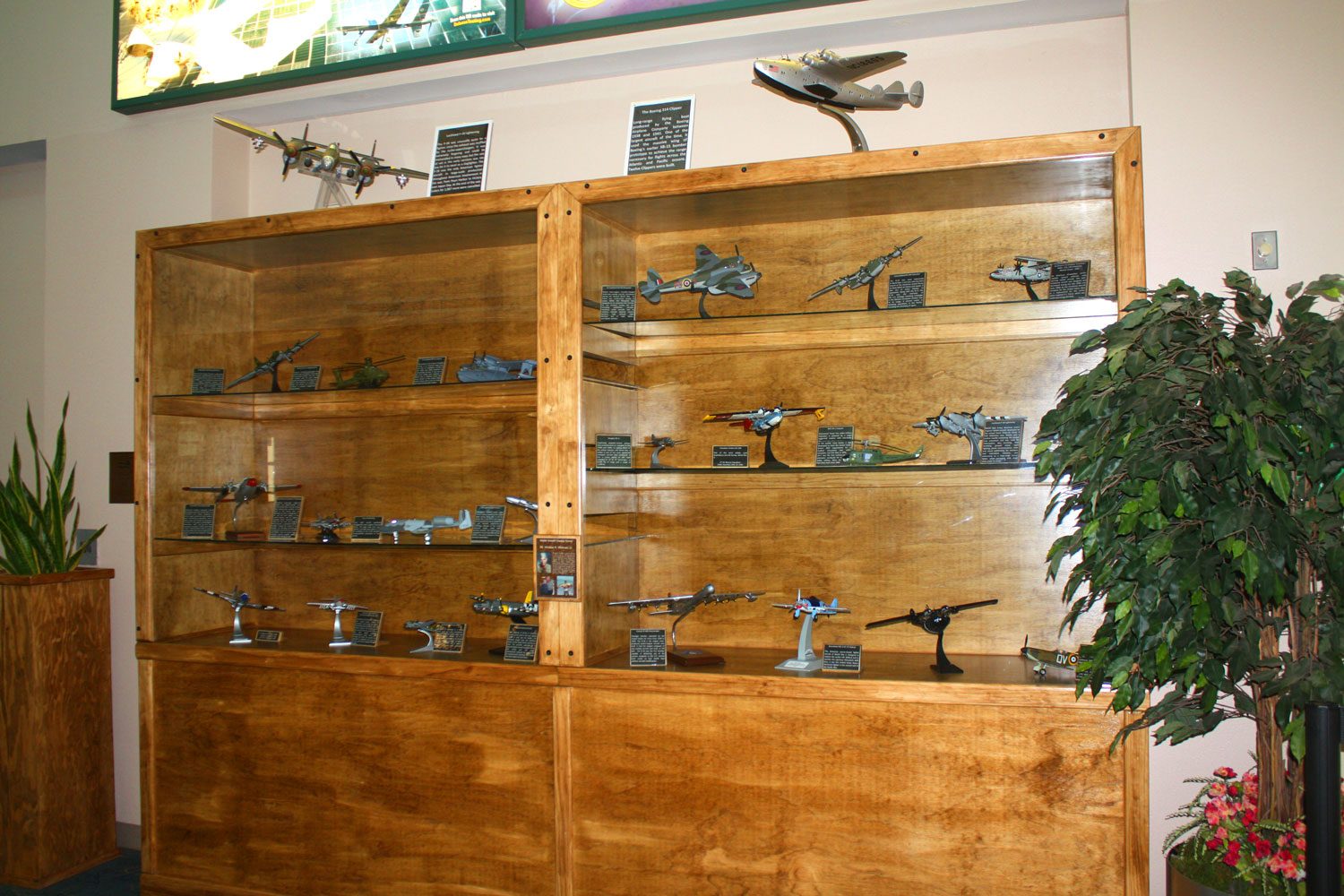 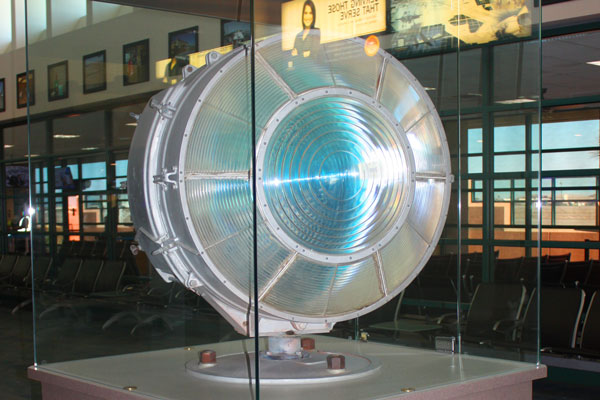 
Every U.S. city with an airport has the landmark rotating beacon, the brilliant revolving green and white floodlight that marks the airport's location to pilots flying at night. This historic beacon was installed in 1951 and shone as a navigational aid to guide aviators at night or during adverse weather for over 51 years. It was retired in 2002 and replaced with a modern appliance.

When it was removed from the MCAS Yuma tower, the beacon was placed on display in the base operations lobby. MCAS Yuma and Yuma International Airport partnered up to establish a permanent home for the beacon on prominent display within the airport terminal. In preparation for the display, airport staff worked with local craftsmen to re-illuminate the beacon at a much lower wattage, so its light can shine once again.

The beacon's last function was to be registered by the MCAS historian as a National Historic Object. It now shines as a symbol of the joint-use relationship between the civilian Yuma International Airport and Marine Corps Air Station Yuma. 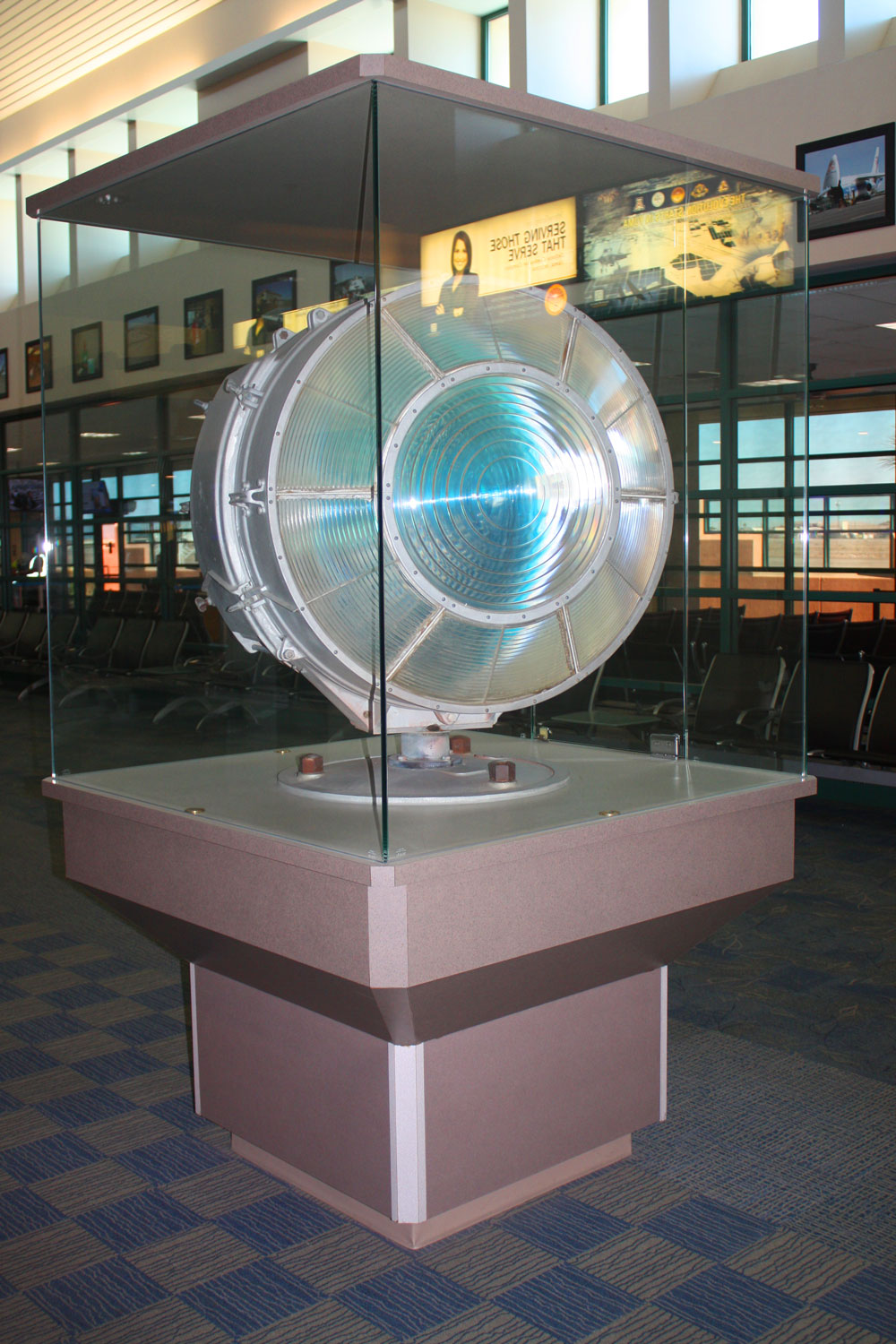 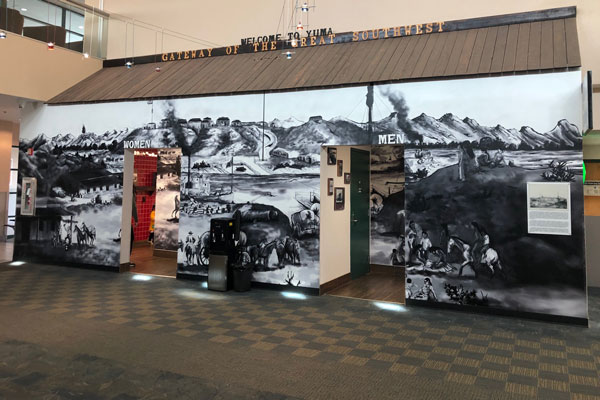 
Lithograph artist George H Baker was well known for his Western Americans scenes. This lithograph is one of his most captivating; as it depicts a unique insight into the life of Fort Yuma, as it was one of the important outposts in the American Southwest. Fort Yuma guarded this important crossing point of the lower part of the Colorado River. Its location played important roles in the early Spanish exploration of the southwest, the Mexican-American War, the U.S. Civil War and the development of the overland transport routes that connected California to the rest of America. Fort Yuma was a critical nexus of transport, trade, commerce and military operations in the American southwest.

The lithograph's view is from the Arizona side of the Colorado River looking across to Fort Yuma which is perched on a bluff overlooking the River. The western bank is shown to be a model of order in an otherwise wild land. The fort's imposing succession of stockades, surmounted by the stars and stripes, overlooks a frontier scene that is unusually candid in content with a caravan of covered wagons, a cable-led ferry prepared to traverse the river from the opposite bank. Docked at the crossing, is a flat-bottomed river steamer, which unloads supplies brought up the river.

George Baker created the lithograph with charmingly crude technical execution and may have intended the lithograph to be a humorous piece. It was produced in very limited quantity as if not destined for broader circulation as it posed risk to offending Victorian society. While the precise date of this lithograph is difficult to establish, writers determine it is as early as 1850 to the later date of 1875. 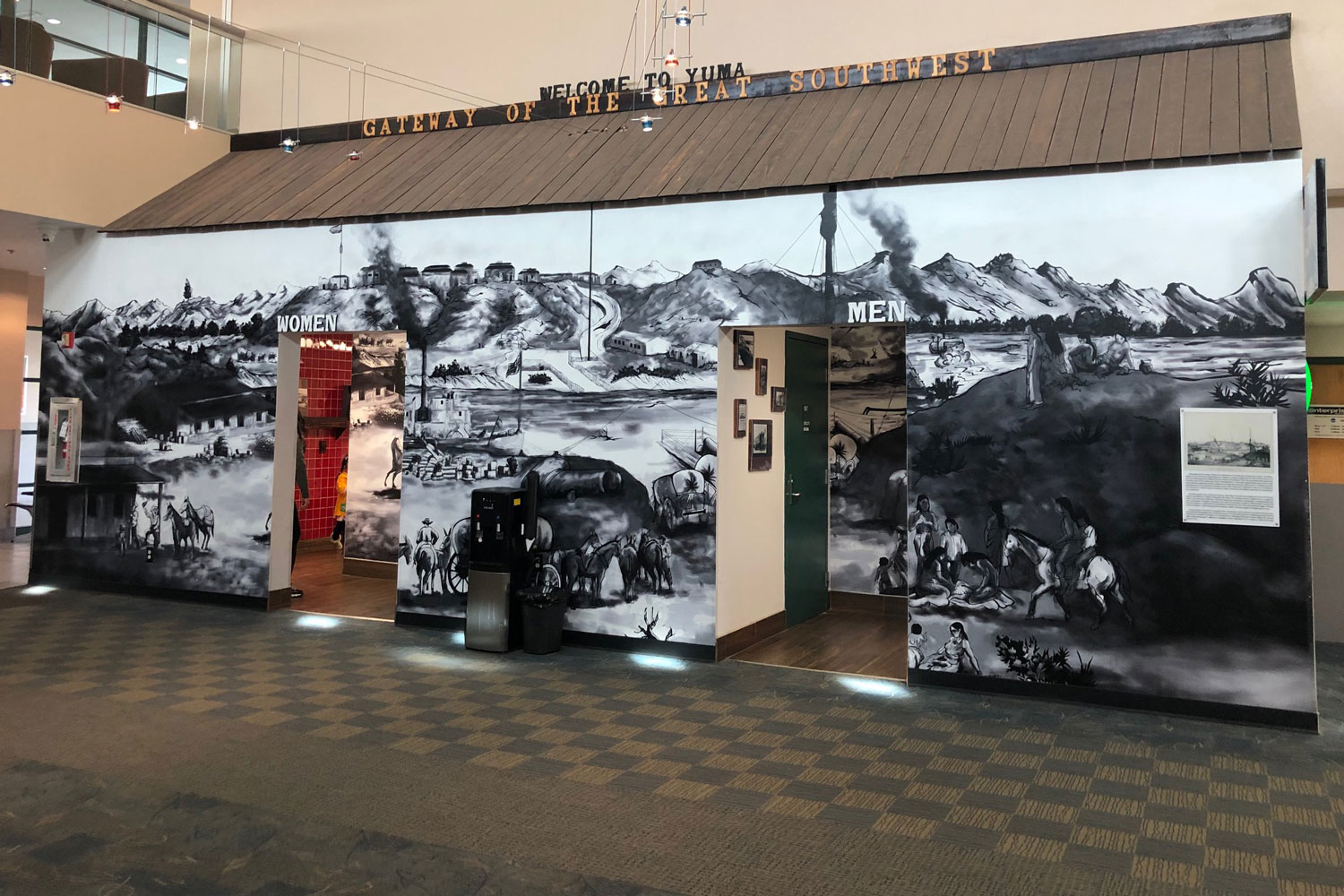 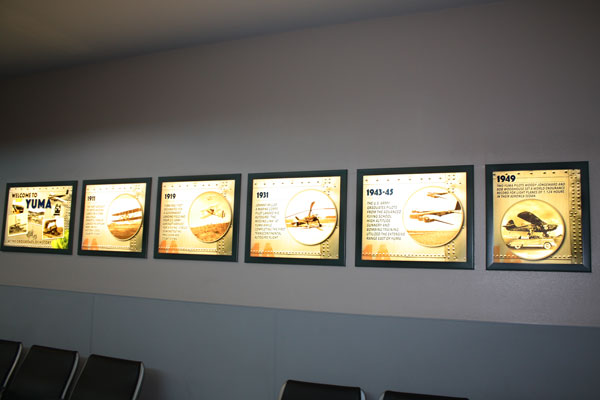 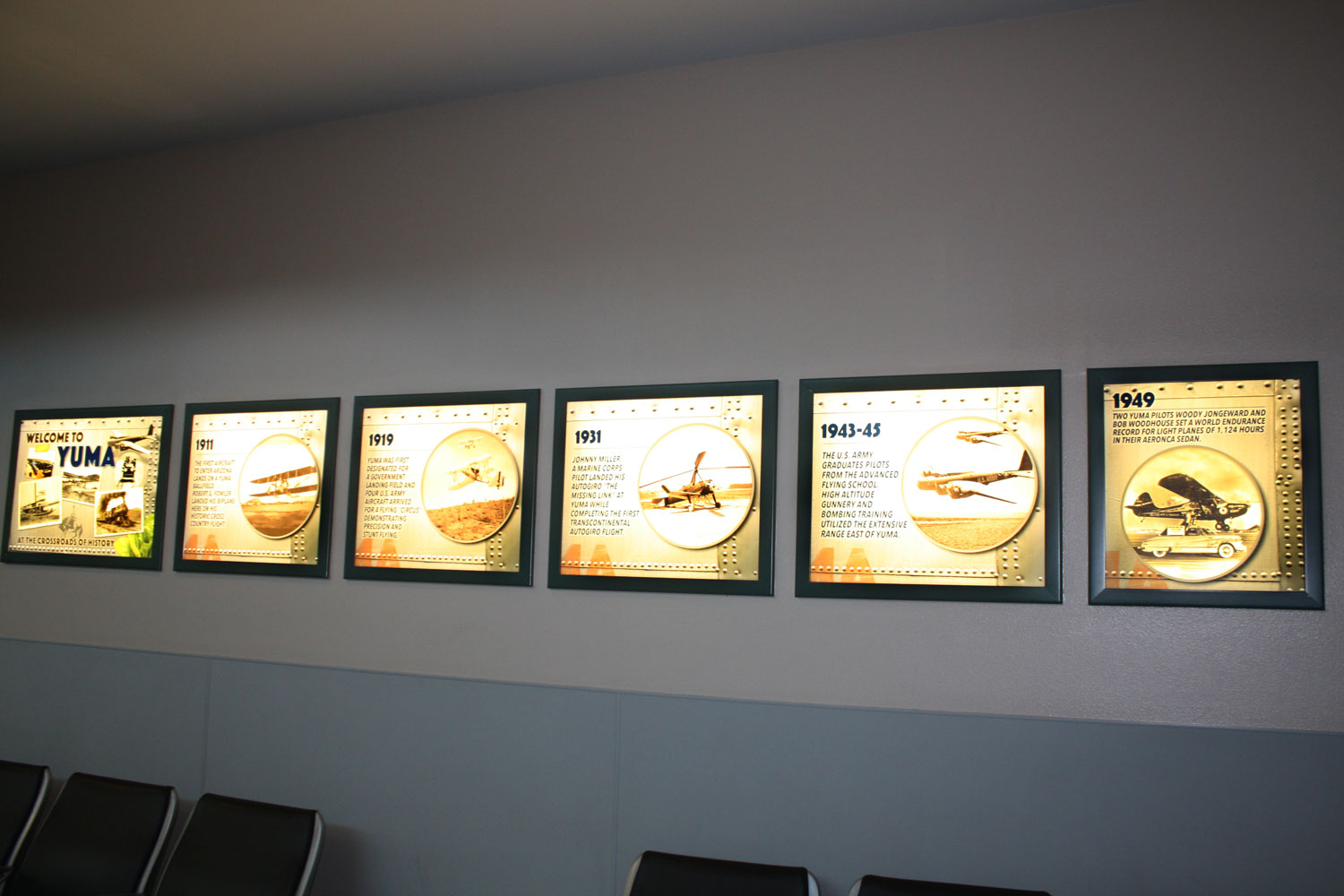 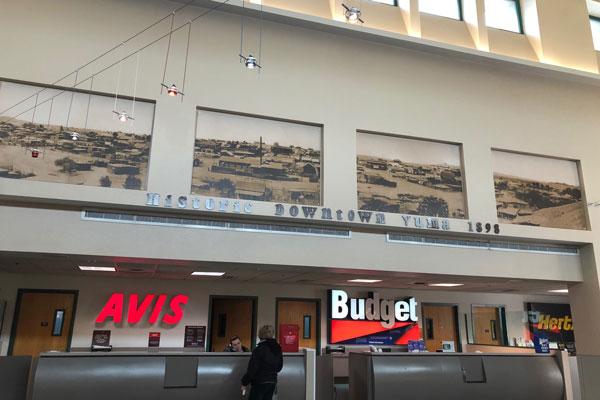 
A panoramic photo of historic downtown Yuma from 1898 can be found above the car rental counters on the first floor, East end of the airport terminal. 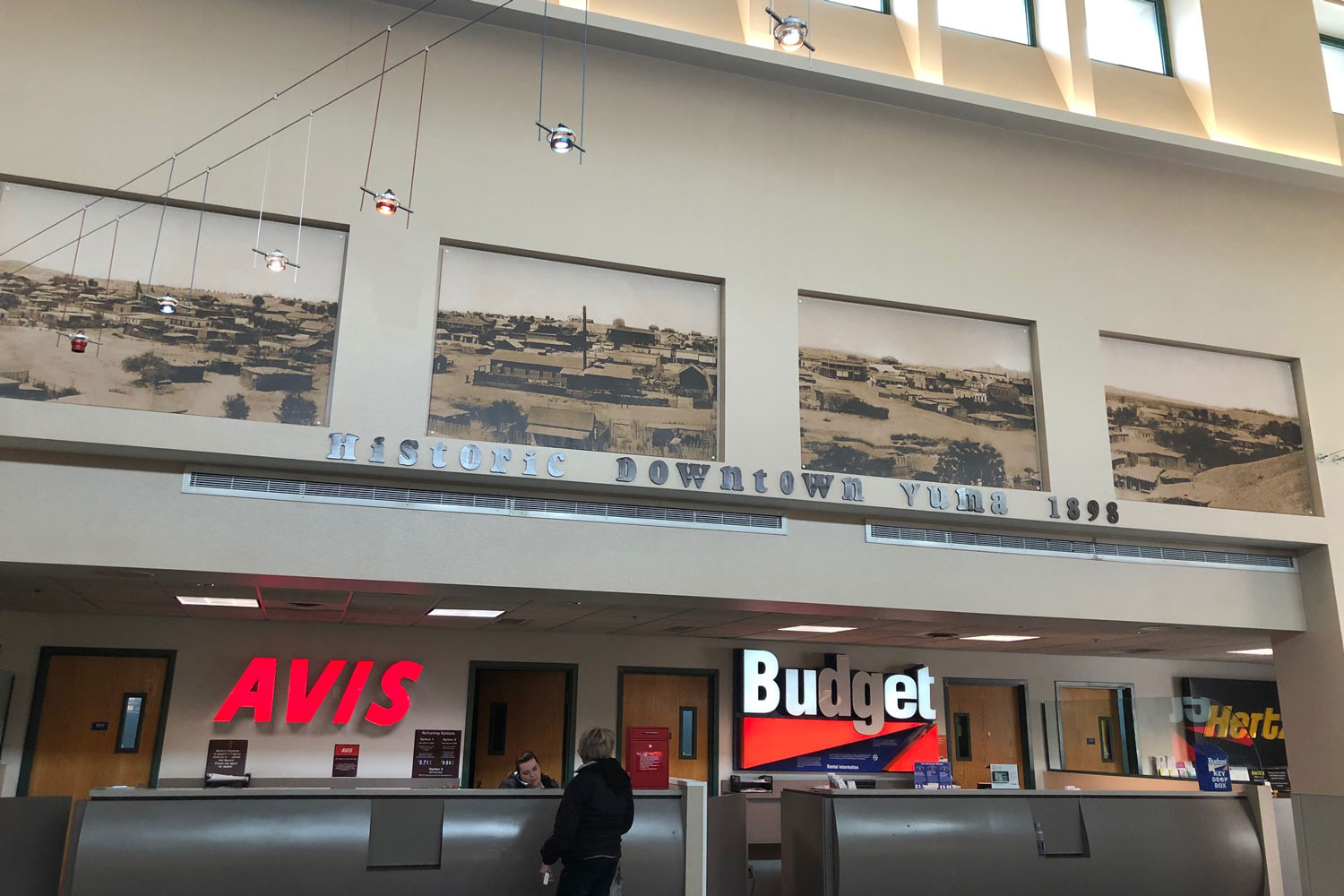 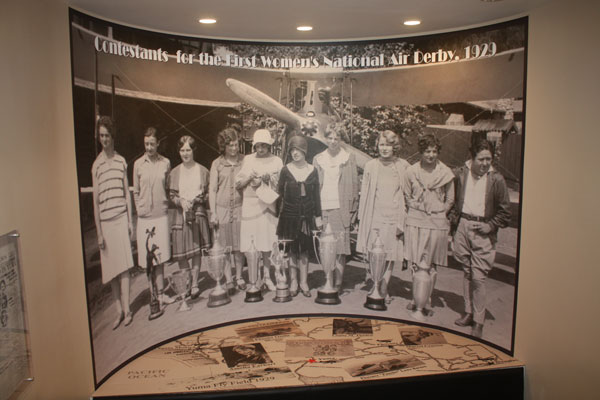 -Located on the East stairwell landing-


In August 2019, Yuma International Airport commemorated the 90th anniversary of the National Women's Air Derby which was the first official women-only air race in the United States. To qualify, pilots had to have at least 100 hours of solo flight, which included a minimum of 25 hours of cross-country flying. Over nine days and 2,800 miles, nineteen of the best women aviators in the nation competed in a cross-country race from Santa Monica, CA to Cleveland, OH beginning August 18, 1929. During their stop in Yuma, Amelia Earhart's propeller caught the ground causing it to break. 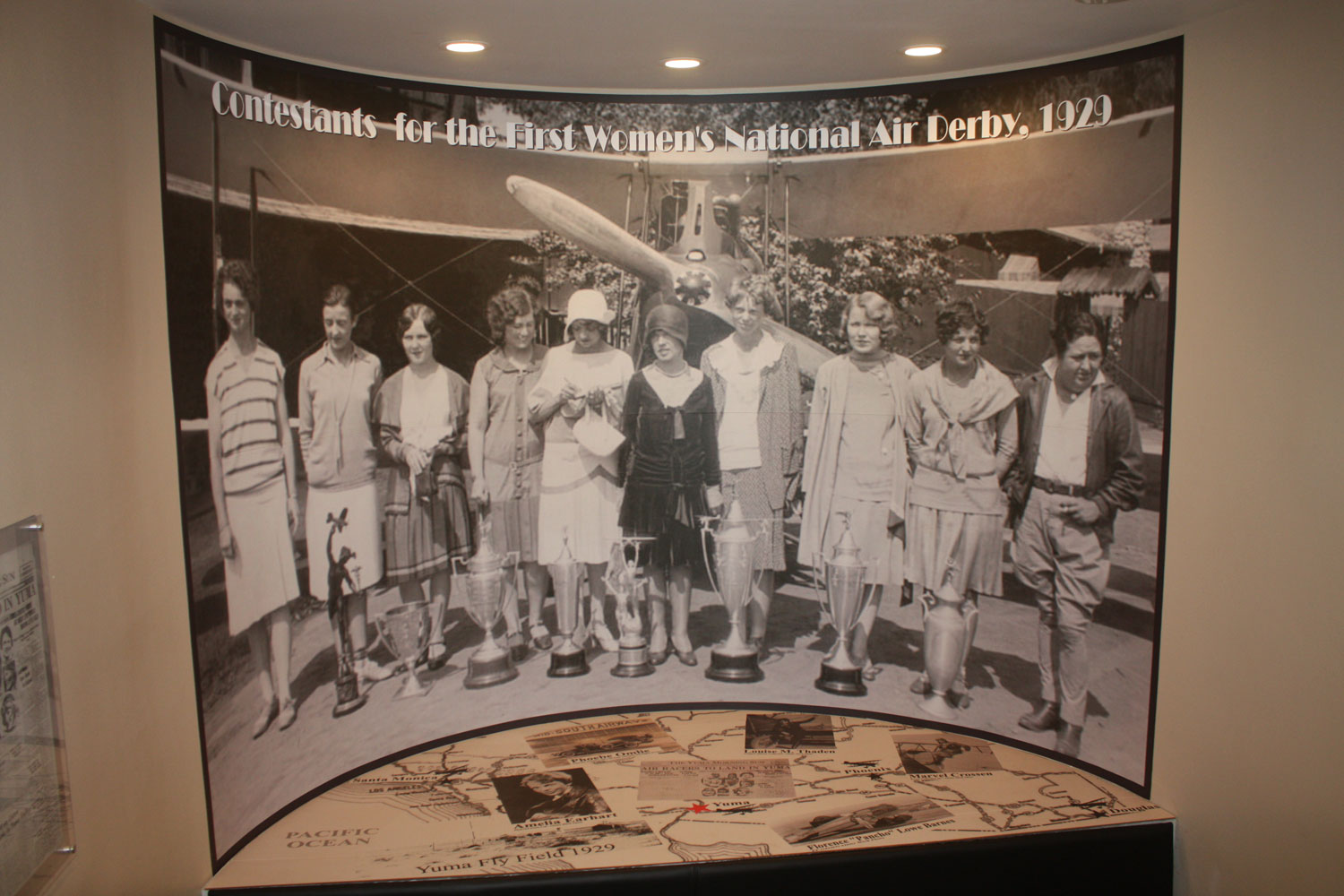 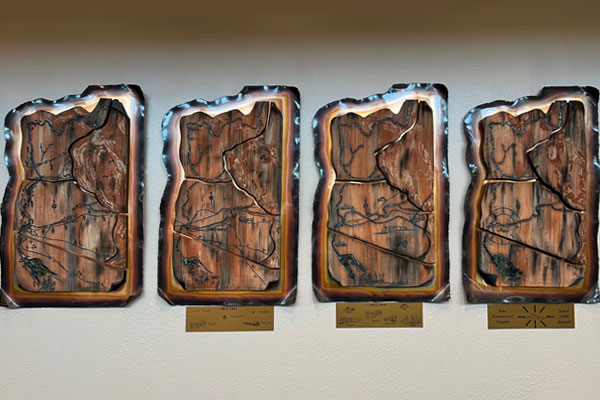 -located near the Operations office-


This set of historical wall reliefs were contributed as part of construction of Yuma International Airport's new terminal in 1999. These wall reliefs are beautifully displayed within the terminal near Operations Office.

Each ceramic tile is an artist's concept of people and events that have helped shape Yuma into what it is today and are hand sculpted from slab and clay, finished in oils and oxides then high fired. The tiles are permanently mounted on a finished copper background. Special recognition to Neil McCallum for his historical research. 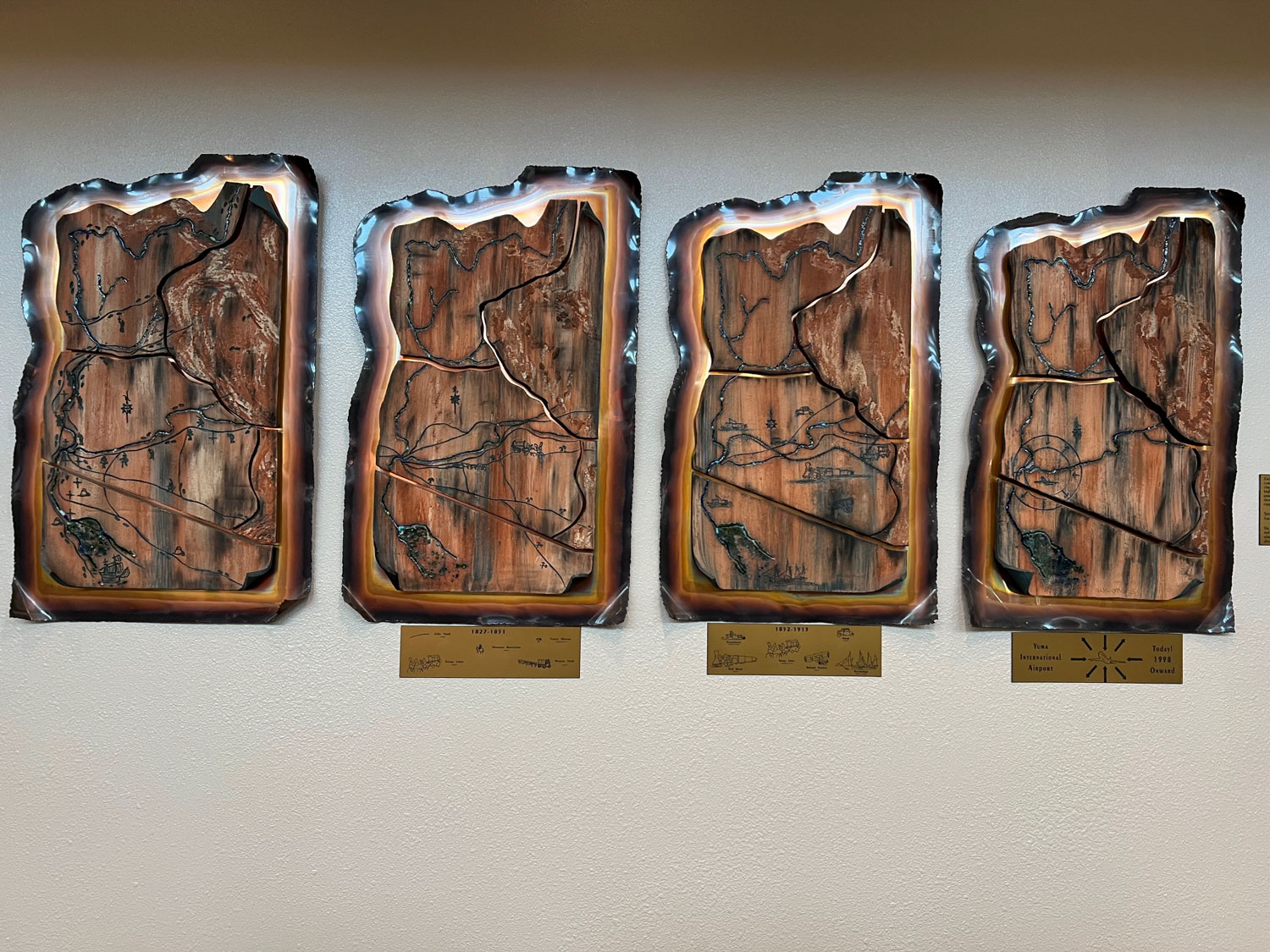